Continuing with shows I have seen and photographed at the Tupelo Music Hall, not long after seeing Dar last fall, came Catie Curtis.  Usually, Catie is out on the road solo, but lately she has been playing out with multi-instrumentalist Jenna Lindbo, a burgeoning singer/songwriter in her own right. Rounding out the band for this album release tour was ace guitarist Thomas Juliano. 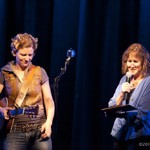 Catie was touring to support her latest release, “Stretch Limousine on Fire”, a terrific collection of songs. I’ve been listening to Catie’s records and seeing her play for about 20 years now, and it’s been a real treat to see her evolution as a songwriter and performer. I imagine it must be something of a challenge for long standing artists to keep things fresh and growing. It’s always impressive to hear how artists like Catie take on that challenge. This show started like the Dar Williams show, with a Q&A with Kate McNally of New Hampshire Public Radio’s Folk Show as part of the Tupelo Public Radio Project. You can listen to that portion of the concert online.

A big bonus for the night was seeing and hearing Jenna Lindbo for the first time. With one CD available at the time of this post, but another due out in the next few months, it’s clear to me that we’ll be watching Jenna become a big part of the folk world. I’m looking forward to hearing the next CD as well as how she continues to grow as an artist. We were treated to three of her songs during the show, including one that is fast becoming a personal favorite thanks to You Tube, “Instrumental Role.” For another of her songs, “Let There be Love”, a friend of Jenna’s came out on stage to perform it in ASL (joined a bit by Catie).

One of the things I enjoy most about being a folk fan is that it’s almost a given that a night out of live music is going to be a good time. That was certainly the case here. The shows are always too short  for my taste. They are my version of “Calgon, take me away!” And yes, of course, there are photos.