Notes from a NERFA Newbie

There’s an annual folk music business conference (not an oxymoron, really) which takes place every year in the Catskills region of New York State. Known by the shorthand of NERFA, it is the Northeast Regional Folk Alliance. I’ve known about it for years but never felt like I really had anything to contribute so never made plans to go. That was silly. It takes more than just musicians to make the folk world move, after all.

So I finally attended this year. And now I am a NERFA wannabe no longer. 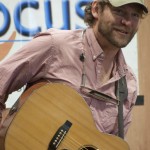 It was quite fortunate that I already have a foundation in the folk world on which I could build there. Seeing many familiar smiling faces, and getting those reassuring welcoming hugs made a big difference as I sifted through the overwhelming nature of the first day or so. Once I allowed myself the caveat that no one can see everything, it became a tiny bit easier to get into the flow of things, though still daunting with the number of choices for workshops, panels, and showcases to be had.

What an incredible and eye opening experience it was. I had considered myself fairly well versed in the folk world, but I came to realize just how much more is out there about which I had been largely unaware. I attended wearing two hats: photographer/web person, and a sort of scout for Vermont Festivals, listening for acts which could potentially fit in with programming in southern Vermont. This made for a whole new way of taking part, deeper and a little more critical, but also more expansive as I was compelled to really grow my listening range. And how greatly I was rewarded for that. 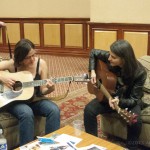 Katie Clarke Waddell (The Boxcar Lilies) and Carolann Solebello, at about 4 AM Saturday night/Sunday morning.

I had been warned about the late nights, and I felt like I went prepared for them. But how can one really be ready for what is essentially a 24/7 music experience? With dozens of rooms offering guerilla (ie, unofficial) showcases deep into the night, there was far more music than anyone can expect to hear in just 3.5 days. I still had to seek out some favorites just because, well, they’re favorites and there’s something comforting about the familiar. At the same time, seeking them out meant hearing new people as well, with in the round time slots, acts before and after, etc. And there’s nothing quite like sitting only inches from people playing. It’s all quite invigorating, and one hardly notices the clock hands swinging (or digital watch ticking) around into the wee hours.

The other thing that struck me was just how friendly everyone is. We folkies tend to be a pretty congenial lot anyway. Familiar and new faces alike are all invested in making sure everyone has the best experience. While there’s a strong business element happening as people network for related gigs of all sorts, there’s the much greater undercurrent of a common love for this music. There’s frequent interplay, jams in the wee hours of the morning in the lobby, impromptu sessions in stairwells and hallways, spontaneous sing alongs on songs we hadn’t even heard before. The constant maelstrom of people squeezing past each other in narrow hallways, carefully stepping over cases for guitars, banjos, upright basses, keyboards and more, or chasing up and down stairs to another floor to catch another showcase adds a giddiness to the whole escapade. Because that’s really what it is, a escapade, a quest for the next sweet ballad or rollicking foot tapper or newly hatched collaboration. It’s how and where magic can get started.

The thread is continuous and strong, tying together a wide range of ages and stages of career, and I loved being in a place where our common nerdiness for this was not only normal but celebrated. Where it makes perfect sense to travel some distance to hear and/or make music. Where no one hesitates to relate their latest great discovery because we are all stronger when we share. In a way, we are each other’s radios, boosting the signals however and wherever we can. The volume on those radios is dialed up to about 20 at NERFA. 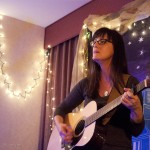 I am grateful to be in the midst of this now, and hopeful I can really contribute to this community more and more over the coming years. Am even contemplating starting up a music-specific blog, motivation to expand my listening, and to be another station of sorts on the internet where maybe I can help someone else discover new-to-them music, too.

So who caught my ears? I almost hesitate to make a list since I don’t want to inadvertently leave anyone I heard out. So, I’ll just offer a list of people new/newer (only heard once or twice previously) to me. And this is by no means an exhaustive list, so don’t read anything into it regarding ‘missing names’. I am still listening to CDs and ‘finding’ more gems! In no particular order, I recommend checking out: Beth DeSombre, Cary Cooper, Miles to Dayton, The Lords of Liechtenstein, Bonnie Ste-Croix, Louise Mosrie, Connor Garvey, Allison Shapira, Harpeth Rising, Sorcha, Karyn Oliver, Melody Walker and Jacob Groopman, Graydon James and Laura Spink, Meg Braun, Sharon Goldman, Paddy Mills, ilyAIMY, Meghan Cary, Marci Geller, Ansel Barnum, Matt Nakoa, Davey O…

Ok, I really want to add links for people I already loved and got to see again, though I apologize in advance for this list’s also being incomplete: Carolann Solebello, Amy Speace, Natala Zukerman, Jenna Lindbo, SONiA and disappear fear, Bethel Steele, Pesky J. Nixon, The YaYas, The Boxcar Lilies, Rachael Sage…

Much gratitude to everyone, musicians and non-musicians alike, who made my first, and hopefully not last, NERFA such a great experience! Oh and of course – there are photos!