Sounds of the Seacoast with Epic – women’s barbershop concert

One might think that the lack of posts for nearly two years (good grief) would mean I haven’t been taking any photos. Quite untrue. I still go to many shows and events, and still shoot many. I’m just ridiculously behind with posting, and will be adding a lot of stuff soon. 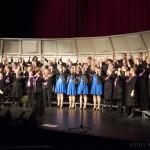 Meanwhile, I’ll start back up with the most recent concert I have seen. On Saturday, September 26, I had the great pleasure of seeing Sounds of the Seacoast, a top notch women’s barbershop chorus based in Portsmouth NH. For the past 6 years, Sounds of the Seacoast has been the winner of their regional contest as part of the Harmony Inc women’s barbershop organization. In 2014, Sounds missed first place in the international contest by only one point. They will be competing again at International in November. Wishing them loads of luck!

The chorus was joined this past weekend by a guest quartet called Epic, hailing from Virginia. Epic won the international quartet competition at Harmony Inc in 2012. They brought such an infectious energy – not to mention fabulous singing – to the stage. The four chapter quartets within Sounds of the Seacoast- The Out of Towners, The Usual Suspects, Kismet, and Vibe – also performed and sang beautifully during the concert.

All in all, it was a wonderful night of songs and harmony. If you like this sort of music, and are in reach of the NH seacoast area, Sounds of the Seacoast will have their Holly Jolly Cabaret on December 13, 2015, at the Jarvis Center in Portsmouth.

See more photos here: Sounds of the Seacoast with Epic