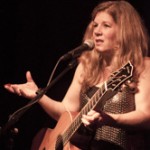 Back in October of 2011, on the 22nd, Dar Williams paid a visit to our little corner of northern New England with a show at the Tupelo Music Hall in White River Junction, Vermont. What made this show a little different from most was that she was also being interviewed by Kate McNally of New Hampshire Public Radio for The Folk Show, part of The Tupelo Public Radio Project. So the first half of the concert was songs interspersed by Q&A, giving us a live interview peek into some of Dar’s thoughts about music and more. Dar’s show was broadcast on the radio in March, but you can hear the nearly one hour piece online.

Accompanied, as she often is, by the incomparable Bryn Roberts on piano/keyboards, it was another fine evening of music. In the process of preparing what would be her next release, In The Time of Gods, we got to hear a couple of new songs. Each song on this new-released album has a root in Greek mythology. It was a tantalizing listen into what would turn out to be a very intriguing and terrific new release, which came out in April of this year.

I don’t think I have ever seen a disappointing Dar show, this one included. There’s always something very comfortable about the music while at the same time challenging me to think. It’s sort of the epitome of folk music, to me. Want to see some photos?