Going back up the timeline to my most recently photographed show: Cheryl Wheeler, with Kenny White, at the Bellows Falls Opera House Lower Theater in Bellows Falls, Vermont. This show was on May 3, 2012, and I’d been looking forward to it since hearing about it early in the year. We’re very lucky to have some strong venues and producers in this area who book some fantastic acts. Charlie Hunter in Bellows Falls is one of those producers. An ardent music fan and supporter through and through (not to mention amazing painter), one can always bank on the fact that his shows are can’t miss events. 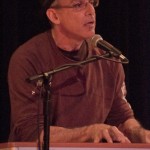 I’ve seen Cheryl many times before over the last 20 years, so that made this booking even more exciting because I knew it would be a great treat. Lately, I am more likely to see her at a festival setting, like at Falcon Ridge Folk Fest, so a smaller show in a smaller room was going to be an extra plus. In the last few years, she has had Kenny White at her side for many shows, and it’s no wonder why. Kenny is a fantastic pianist and songwriter in his own right. We were treated to an opening set which showcased all that Kenny has to offer. It’s clear how Cheryl and Kenny work so well together, since he has just as offbeat a sense of humor as Cheryl. 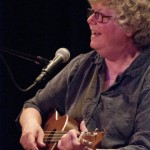 Cheryl herself turned in a classically enjoyable set. For those who haven’t had the pleasure of seeing her before, you can be falling out of your chair laughing at a song’s lead in and then a humorous song itself (like her ode to porta potties) and then in the next moment, have tears from a deeply touching ballad. And having those styles of songs back to back is perfectly natural, never feels out of place. Lately, Cheryl has been writing on and playing a ukulele. While she adds a disclaimer that she hasn’t had it for very long and hardly considers herself to be an actual ukulele player, she certainly seems quite at ease and adept at it. We got three new uke songs, all sure to be classics. I wonder how many pets will be getting named Shutcher Piehole in coming years… 😉 (Don’t even want to think about parents who would name a kid that!)

Oh and for those who enjoy visual art to go with music, check out a fantastic book called Nice Rendition. This is a book full of original calligraphy renderings of many of Cheryl’s songs. The pieces inside are just stunning. You can order it online, or get it at some of Cheryl’s shows. I’m excited that I was able to pick up a copy at this concert, and will be savoring it for a long time to come.

View the photos from this concert.

A few days ago, Pete Seeger turned 93 years strong. I had the very great fortune of meeting Pete at a show which featured him, his grandson, Tao Rodriguez-Seeger, and Guy Davis back in 2008. With the news of his birthday, I went back into my archives and dug up the photos I took at that show. 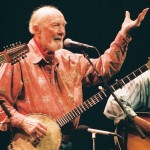 I admittedly don’t remember much about the show itself, at this point, but I will never forget Pete, himself. Everything he speaks is a story, a connection of what’s happening in that moment to things which have happened before. I stood in the wings of the stage, watching soundcheck. When done, Pete walked over, looked at the art on the wall behind me, and started telling stories of other art on other walls in other theaters. The man is an endless source of history and art, truth and peace. I hope someone has been recording his stories because I can’t imagine any other simple place where all that knowledge is kept and so easily shared.

Thanks, Pete, for being who you are.

(oh, and the rest of the show, with Tao and Guy? I may not remember details but I do remember it was a terrific night of music. Thanks, gentlemen!)

Second post is dipping into the archives, to a very special show which took place on January 7, 2011. Boston public radio station WUMB threw a grand retirement part for long time folk DJ Dick Pleasants with just a few of his favorite musicians. Taking place in  the beautiful Sanders Theater at Harvard University in Cambridge MA, this was a show not to be missed.

The line up included: Antje Duvekot, Ellis Paul, Buskin & Batteau, Tom Rush, Patty Larkin, Jonatha Brooke, Lori McKenna, Jonathan Edwards, Brother Sun, Kate Taylor. This was a line up of folk royalty, no doubt. Add some of the accompanying musicians like Don Conoscenti, Stuart Shuman, Taylor Armerding, Radoslav Lorkovic, Marshal Rosenberg and more, plus a video cameo from Christine Lavin, and, well, it was a pretty special night. Hosted by Dave Palmater, each performer had 3 songs to play to a very full house, and not a note was misplaced. Makes me feel very lucky to live geographically close enough to have been able to take in this show. Now, if only I had sprung for the concert DVD that they were selling that night!

It was a special privilege for me to help document the evening through photos, and I am pleased to share them. Here’s where you’ll find the album. Enjoy!

Kicking off the blog with my first show of 2012!

Welcome to my new photo gallery blog! My goal is to post photos both around when they are taken, and from my archives. You can see by the navigation that this should cover many possible subjects!

I’m kicking this off with the first show I got to see in 2012, back in February. I was most eager to catch a concert as my last one had been Dar Williams on December 3, 2011. That was a long gap between shows for me! There’s nothing like live music.

Carolann Solebello was the opener for this concert at the Circle of Friends Coffeehouse in Franklin, MA. A founding member of the fabulous trio, Red Molly, Carolann is now forging her own solo career. These days, she’s supporting a terrific new album called Threshold. Her entire set was composed of songs from Threshold, including one of my favorites, “Someone Else’s Dream.” I know she won some new fans that night as she was in great voice and the songs are so strong.

Following Carolann was Tracy Grammer, accompanied by Jim Henry. The latest collection that Tracy has released is called Little Blue Egg, perhaps the final collection of songs with the late Dave Carter. This is a wonderful treat, to have more of his music out here. He passed much too young, and we can only wonder what additional musical treasures he would have created. Luckily, he has a tireless and ardent beacon for his legacy in Tracy, who is a solid songwriter in her own right. Since I usually see Tracy at the Falcon Ridge Folk Festival, where we are either drowning or melting depending on the weather gods for any given year, it was nice to see her put on a ‘regular’ show in a relaxed, indoor setting, complete with storytelling. I was delighted to hear one of my favorites, Gyspy Rose, as well as the story behind it, where Dave originally wanted Tracy to flip the gender of the song and sing it from her perspective. Tracy wouldn’t do this until after Dave’s passing. Now, having the two different readings of the song presents a very interesting and enjoyable contrast.

The concert was a beautiful evening of music, and I am glad I was able to kick off my year with these fine ladies (and a very talented gentleman)!

By the way, for anyone looking to help, Tracy has a goal of selling 100,000 copies of Little Blue Egg, a very large number for an indie acoustic release. Let’s make it happen!

Oh yes, and there are photos! Check ’em out, if you’d like. Thanks and please do check back for new blog additions.